Words are worth a million feelings?


As a novelist and a human, I am plagued by the voice of my inner critic at times. Given the lagging sales of novels and author earnings right now, my inner critic has been clamoring a lot lately about how "a picture is worth a thousand words" so maybe I should just shut up with the novel writing and use my photography skills to tell stories. There are so many good ways to tell a story with pictures, or do visual storytelling, now and "who reads a whole book now anyway, we don't even read Facebook posts that require us to click See More " (a friend who chooses to remain anonymous).


If a picture is worth a thousand words, then why do we write novels? Do we still need novels?

Since my inner critic won't shut up otherwise, I have to have an answer so I thought about some of the most compelling photographs I've seen lately. Most of them are from the assorted Scuba Diving magazines I get now that I'm a (relatively) newly certified Scuba Diver. I've been a photographer for twenty plus years (i.e. earn money for selling photos kind), but I'm too new to Scuba Diving to master the challenges of taking good photos underwater. Even if I was better at capturing the light underwater just right, I still think it wouldn't be enough. Even the exquisite composites of expert underwater photographers (e.g. Cathy Church) don't sufficiently, satisfactorily, tell the heart of the story.
The pictures are beautiful, otherworldly, maybe even evocative (they make me want to tell stories sometimes), but somehow they still lack some dramatic punch. They say nothing about the millions of feelings or thoughts wrapped up in them unseen like the Electromagnetic spectrum. That picture says nothing about the chaff of the oversized dive computer against my wrist bone, the clinging suck of the wetsuit collar on my neck, the overwhelming dryness of the air I have to think about pulling in through the zinc taste of my regulator, the salt in my eyes because the mask isn't really that watertight, the hollow rumble of my stomach because I've traveled so far and it doesn't pay to eat much before going down, the pressure and extra degree of chill of each depth of water pressing in on my ribs, or my nagging wonder about where my dive buddy just wandered off. No matter how pretty, the picture doesn't explain why I learned to tolerate all of this discomfort to see this stuff first-hand.
I am weightless here thanks to the magic of neutral buoyancy, free to move in ways that are typically impossible under the influence of sobering gravity. My pictures don't show the school of Seargeant Major fish following me like curious puppies, bumping at my elbows as I try to frame the shot. I can feel the ghostly, delicate, caress of the hundreds of tiny Common Jellyfish against my bare skin as they ballet by. Just out of frame is a mysterious grotto where the light slivers and wanes around a dozen sharks at rest and the Amber Jackfish ahead does her best to keep an eye on them and an eye on me. Below me are even deeper gradations of blue, seeming unending and even wider than the sky above that is reduced to a simple translucent lid of sunshine overhead. I want to put the camera down. I want to tell the deeper story.
This moment is pure exploratory joy, like walking the moon. There is a good probability that no other living human has been here and seen this. There are still things here without any given names. The life and light on the reef, even the reef itself, change by the hour. Every snapshot falls flat. You can't tell from any of my pictures that this is the first time in two years of incredible stress and common grief that I feel like I can really breathe deep, despite the pressing weight of the entire Caribbean ocean around me. The pictures lack emotional context. I think novels exist because words are worth a million feelings.
Novels can go below the surface into the oceans of our souls. In such brave, new worlds I think words still have greater currency. 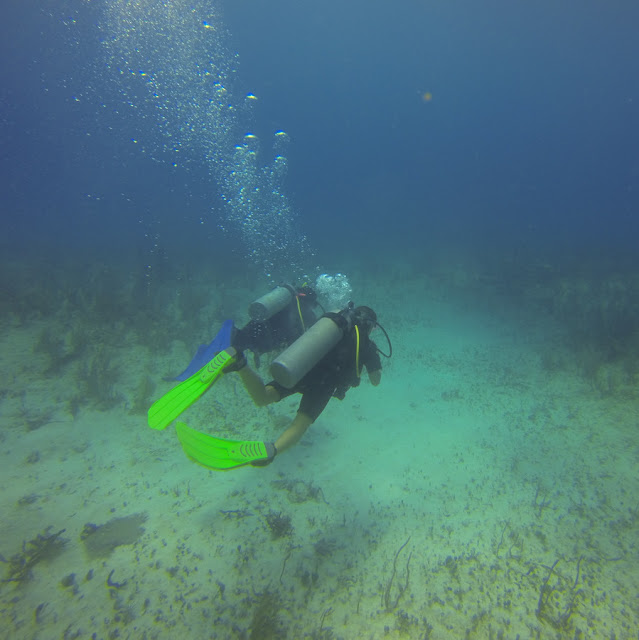