Would voting feel better if?


I'm no political scientist. I'm not even what one would call a person with deep political convictions. However, I am someone who wants to elect the best person for a job, and in my lifetime I have yet to feel that I have ever been afforded an opportunity to do that on the political scene. I realize I have (so far to date) only been able to vote for the person I suspect will do the least harm in office.

I am also a writer and artist, and as such I feel a responsibility when I realize something isn't as good as it should be to start asking the questions I know will lead to a new model.

Maybe it is time to start thinking out of all of the boxes on the ballots?  Are we wise enough to try blending all the best parts of all the political systems of the world?  Are we brave enough to attempt managing the change before it manages us?  How would we want to do it?

When voting for the leader of the free world feels this awful and contentious, I take it as a sign that it is at least time to start asking these questions. As Buckminster Fuller said, "You never change things by fighting the existing reality. To change something, build a new model that makes the existing model obsolete."

So maybe building a new model means building a new party?  A moderate party? As my grandmother said, "everything in moderation--the tricky part is finding the right mix."  I propose we build a new party model, based on humanistic principles that blends the best of both parties.  I think this could lead us to a new reality where voting feels better.

But more importantly, I think a country 239 year-old country should be wise and brave enough to start building and testing some new models--based on all that we've learned since our fore-fathers did it to make one country, out of many colonies.  I hope to spark you to start asking yourself, your friends, and certainly your governmental representatives and elected officials one question:


How do we blend all the best parts of all the political systems of the world and history in a way that allows America to be an ever greater place for more and more people to pursue happiness? 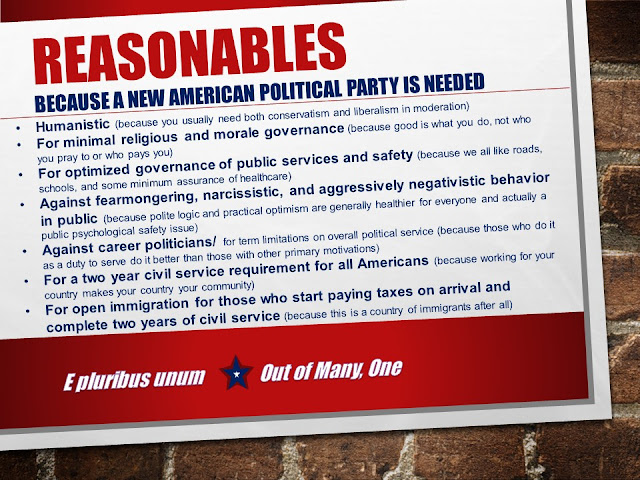